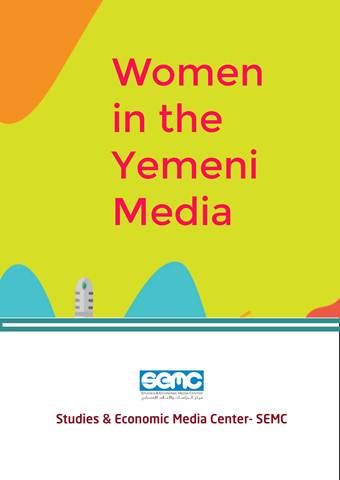 A study , published by Studies & Economic Media Center (SEMC) , revealed the low percentage of women’s attendance in the media (TV) where the percentage of women’s appearance was 9.7% while men showed 90.3%. Study , which targeted Seven partisan and independent TV channels , emphasized that women’s participation in the news whether as a journalist or source of information based on personal experience or eyewitness, or as a topic of news story is very little in the total presence of sex in the media (TVs) Study added that TV channels have ignored women’s issues and ignored the role of Yemeni women as a decision-makers , an experts in specific fields, despite the presence of women as experts in many fields. However, these channels did not attempt to deal with women as an experts or references in discussing issues , either economic, political or social. Study also revealed that the percentage of women’s presence as a topic of news and programs presenters is the highest, whether it is journalist or topic of story in the Yemeni TV channels. They constituted 11.7% compared to men by 20.9%. While the percentage of female reporters in the field is 4.4%, compared with 30.6% for male field reporters. The participation of women in other roles is also lower in the production of TV programs and news such as production, filming, lighting and sound engineering. The supervision and direction is 1.6% compared to the men who dominated these roles by 18.6%. Women are completely absent in the number of programs and TV news on TV channels where men dominate the role of preparation by 12.2%. The presence of women in TVs distributed among the Yemeni channels, where Balqis’s TV is at the top of the list by 35.4%, followed by al-Saeeda TV by 14.3% and in the third place is Yemen’s two TV of legitimate government and Houthis by 10.5%. Yemen Shabab TV and Yemen Today TV have an equal share by 10.2%, and Hadramout TV at the bottom of list by 8.9%. Mustafa Nasr, Chairman of SEMC , explained that study identified the extent to which the media outlets address inequality issues between women and men, determined the roles of women in the media, evaluated the role of women in programs and news, in addition to evaluate the stereotypical image portrayed by the media on gender and assessing the extent to which the program or news is guaranteed to protect women victims and witnesses. Study affirm on the importance of contributing to the advancement of Yemeni women’s image in the media in a balanced and objective manner, based on its legal and human rights to be presented in the media as a human being possessing all elements of creativity and excellence and capable of doing achievements in all areas of life alongside men . In addition to the importance of identifying the real situation of the trends presenting the Yemeni women in the media in order to be able to develop policies and appropriate programs to correct the women’s image and present them appropriately, raising the level of media content of women in radio and TV programs and the newspapers, magazines and news websites so as to achieve a kind of balance between what is presented about the women and men. The Studies and Economic Media Center (SEMC) is one of the most prominent Yemeni NGOs that works on , and spreads awareness of economic issues, in addition to buttressing good governance and public engagement in decision making, and working towards the creation of professional media