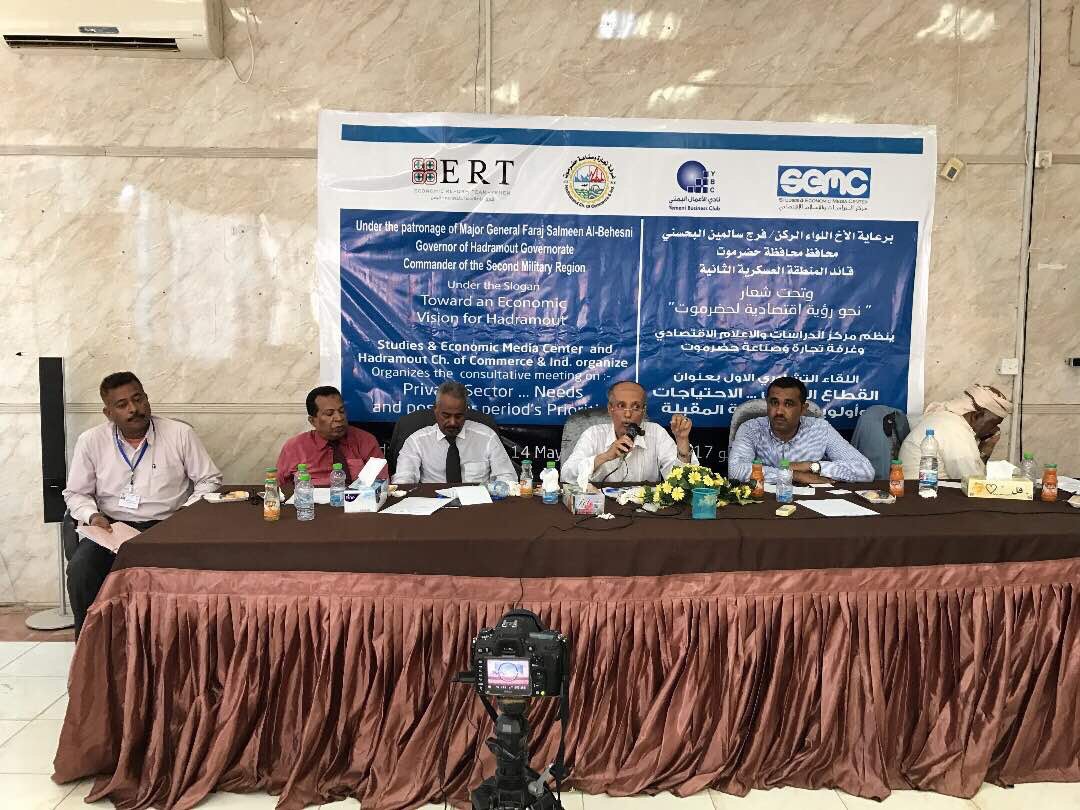 The private sector’s consultative meeting has taken place in the governorate of Hadramout under the motto “the private sector —the needs and priorities of the forthcoming stage—towards a vision for Hadramout”. 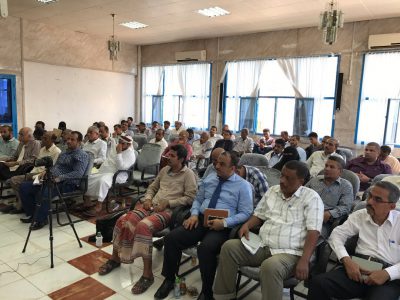 Speaking at the opening of the meeting, organized by SEMC and Hadramout chamber of commerce and industry, Sheikh Omar Bajarash, chairman of Hadramout chamber of commerce and industry, affirmed that the meeting is a step in the right direction  in terms of initiating the development stage, indicating that the governorate has overcome the difficulties faced during the previous phase.

“Our goal is to work towards making Hadrmaout peaceful, stable and prosperous” Jarash said, stressing the importance of reactivating the executive offices of the local government ,the central bank, provide liquidity, reopen Al-Rayan airport, revitalize Al-Mukala seaport and improve services therein, encourage competition in terms of unloading products, and solving transport problems. He called for the private sector to be allowed to invest in public services and for holding companies to harness oil, gas and agricultural resources.

For his part,  the deputy governor of Hadramout for oil and energy affairs, Omar Al-Haiqi, the people of Hadramout to serve their own governorate away from party affiliation and government form, pointing out there are major challenges facing the province, which requires great efforts to “put our home in order”.

He affirmed that the governorate’s leadership is in the process of appointing  deputy governors  to three service sectors so as to avoid duality in terms of  administrative performance.

He made it clear that Hadramout suffers from power shortage, as the current power capacity doesn’t exceed 150 mg watt, wondering “how can we invest while we have power shortages”.

He highlighted that there are promising resources in Hadramout, which has over 25 oil blocks, include offshore and desert blocks, affirming that there are consultations with some foreign oil companies regarding convincing them to come back to work in the governorate in return for some facilitations. He also confirmed that the local authority has opened its doors to all and laid out plans for the next phase during which lots of development projects shall be executed.  He pointed out that basic services shall be prioritized.

“Masila Petroleum is the only oil company in Hadramout. Unfortunately, however, the volume of the daily production doesn’t exceed 35,000 barrels per day,a non-renewable deposit which will deplete within one year. So, global companies allocate part of their revenue for making new explorations and developing oil fields,” he noted.

Majdai Buabes, acting director of the chamber of commerce and industry, reviewed the efforts exerted by the private sector during the past stage, especially in humanitarian relief, pointing out Hadramout businessmen’s distinctive experience in social responsibility, particularly in the field of offering aid to war-affected people and supporting health and education services.

He said that there are many challenges to development, mainly infrastructure.

For his part, Mustafa Nassr, SEMC chairman, reviewed the most recent indicators pertaining to war effects on the private sector, elaborating on war damage and the sustained flight of national capital abroad.

He   affirmed that  the meeting comes at the backdrop of the efforts exerted by the economic reform team involving most prominent Yemeni businessmen, experts and civil society representatives, and contributes to laying down economic development policies.

He said the meeting constitutes an opportunity for Hadramout to serve a successful development model, especially as it witnesses a semblance of security and stability, unlike other governorates. He debated with participants the key problems facing the private sector and the proposed solutions thereto.

Businessmen in attendance showed readiness to engage in development efforts, urging the local government to facilitate the operations of the private sector.

Participants urged local authorities to afford opportunity to investors to do ventures in public services, including roads, ports and airports, operating and developing Al-Rayan airport. Others proposed the establishment of economic investment council in order for the private sector to present a number of proposals. They affirmed that Hadramout qualifies on all counts to serve as a good development model for the whole country.

They also approved the formation of a business committee to make proposals for setting out economic vision for Hadramout from a business viewpoint as well as making preparations for a workshop involving local experts to share views and experiences on development. They further proposed a set of investment ventures in service sectors to be carried out by the private sector.