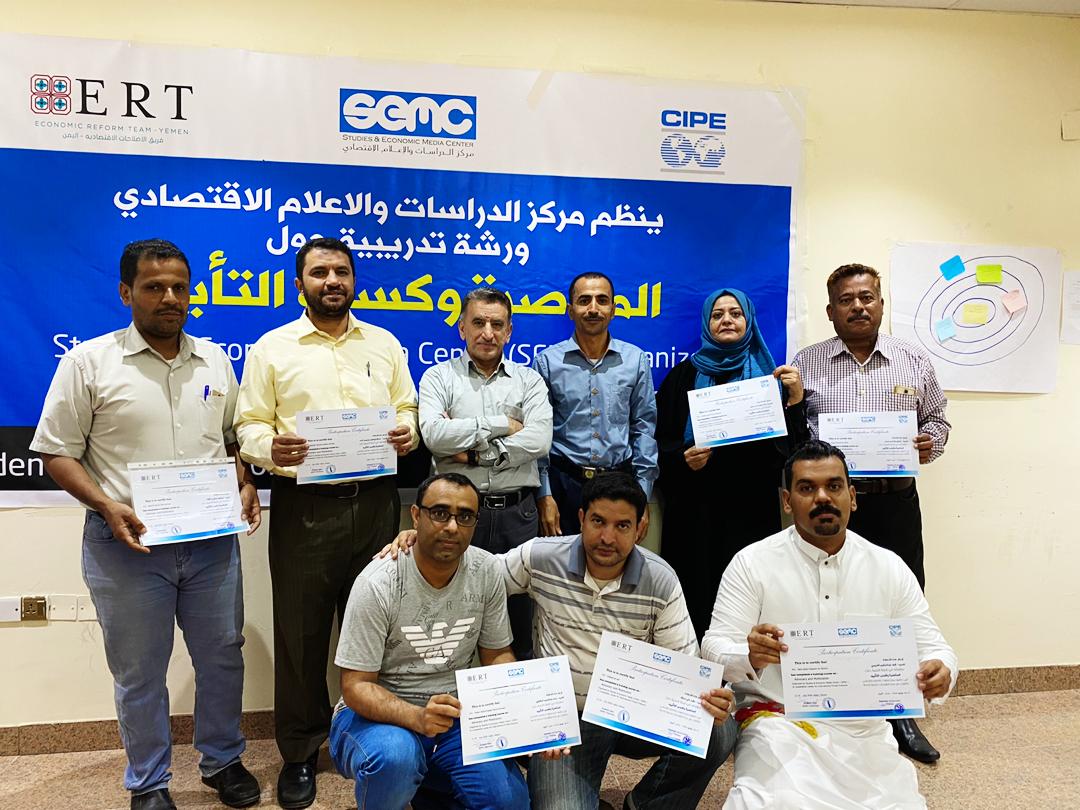 The Studies and Economic Media Center (SEMC) has brought to a close a training workshop on advocacy and garnering support for the private sector advocacy team in Yemen. The workshop, which targeted eight members of local pro-big business development committees in the provinces of Aden, Taiz, Mareb and Hadramout.

The function sought to build and buttress the capacities of coalition members in terms of  conducting advocacy campaigns and setting out their strategies in such a way as to address private sector issues with the aim of reviving the Yemeni economy and buttressing development.

The function ran for four days, with the participants coming up with  a strategic plan for supporting the economic matrices fixated on multiple priority  issues laid out by the economic reform team.  Nashwan Al-Samiri, a media consultant, and the trainer of the function, affirmed that the training is actually meant for an already functioning team who, in turn, would offer its expertise to the advocacy groups in target provinces as conditions may  allow. He indicated that participants have acquired the necessary skills to carry out advocacy campaigns, in addition to coming up with a plan that can be further developed and implemented  in a way that supports the approval of the matrix at the province level.

” At the workshop, we have learned oodles of skills and new techniques that will enable us to advocate for just issues related  to the economic sector, which are of concern to decision-makers, and which contribute to stabilizing business activity, thus creating favorable business conditions,” said Yasser Maqtari, an economist.

” A stable and sustainable economic activity would certainly cushion the effects of the war on the economic situation and standards of living in society, given the crisis gripping the country,” he added.

Another trainee Fuad Huwaish said:” I am glad to have taken part in this training course that meant a lot   for me- I have learned a lot from it. Indeed, the skills gained would further boost participants’ capacities in a manner that would enable them to support economic issues in the country in general,  and Taiz in particular,”.

SEMC is a not-for-profit NGO  working towards qualifying and spreading awareness about economic issues, in addition to boosting transparency, public participation in decision making, creating professional media, and empowering youth and women economically and bolstering their role in peace  building.