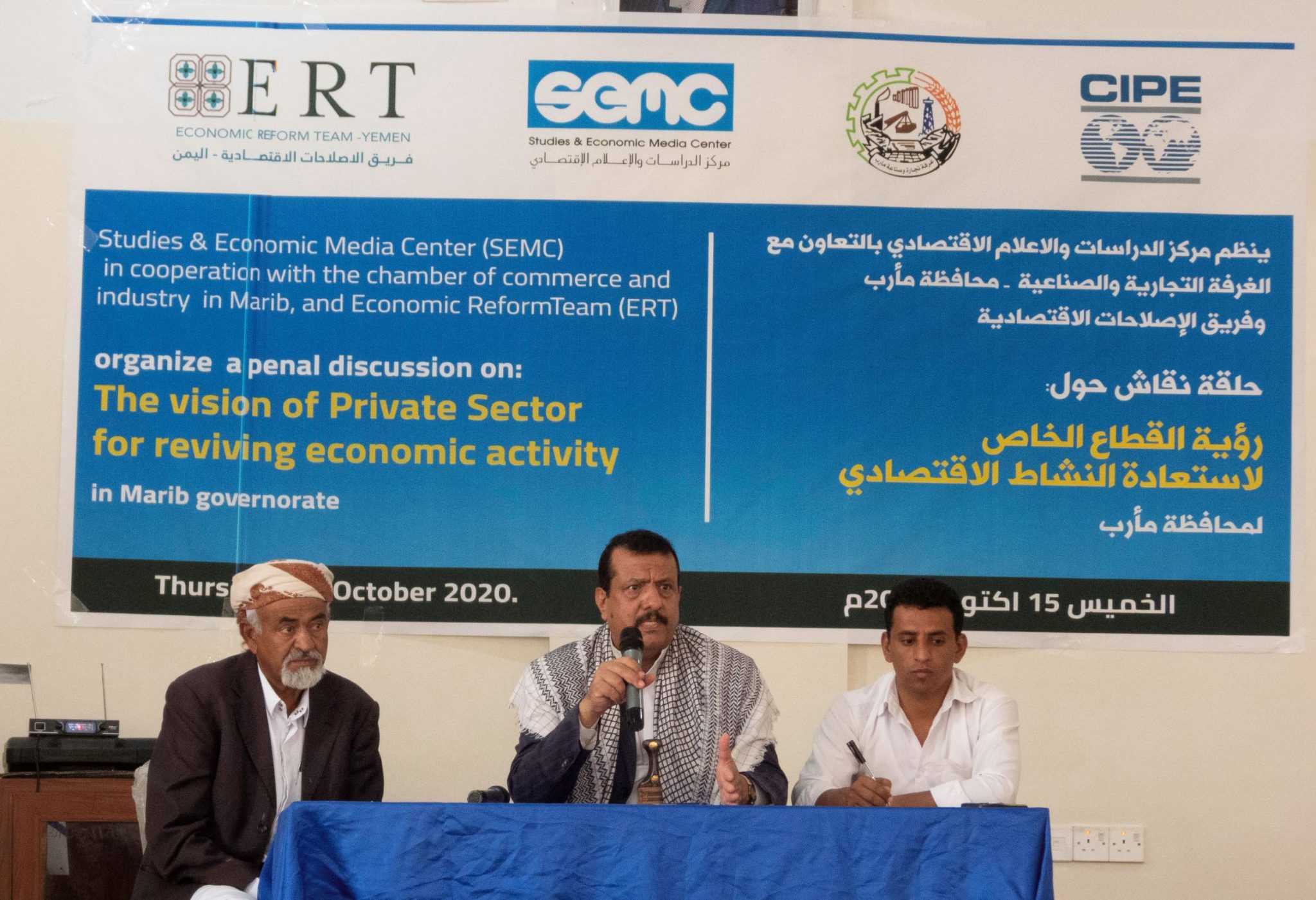 Security and stability are the top priorities.. Local Stirs to recover economic activity in Yemeni governorates

Security stability, partnership between the government and the private sector, and the formation of committees to follow up the implementation of the outputs to improve the development environment.’ These priorities were the focus of the outputs of the series of discussions moderated by the Studies and Economic Media Center (SEMC) in cooperation with the Chambers of Commerce and Industry in Taiz, Marib, Mukalla, Seiyun, and the Economic Reforms Team (ERT) in the target governorates.

Over the past months, a number of Yemeni cities have witnessed in-depth discussions on the “future visions for the recovery of economic activity in Yemeni governorates,” in which a number of general managers of the executive offices in the respective governorates, academics, specialists, researchers in the economic field and the private sector and leading businesspersons and investors have participated.

These visions have been transformed into matrices that diagnosed the economic reality of those governorates based on the economic environment, resources and the impact of the war on the economic fundamentals. The discussions focused on the opportunities and challenges in order to come up with a clear future vision for the advancement of the economic situation.
The discussion sessions took place in Taiz, Mukalla, Seiyun and Marib. In Taiz, participants discussed the areas of the economic matrix represented in security stability, development and economic activity, public services and infrastructure, public development and administration. The participants discussed developing visions, solutions and investment opportunities, facing current and future challenges, and the mechanisms to be employed during the next phase.

Security is a priority for stabilit

In the two discussion sessions, the first in the town of Al-Turbah and the second in the city of Taiz, participants demanded focusing on the security issue, as it is the most important factor and the gateway to solve most of the problems that hinder the resumption of economic activity in the governorate.

They highlighted the necessity to intensify investment in the fish and agricultural sector, and remove administrative and security obstacles to investors, and support self-employment opportunities and small enterprises.
The participants formed a minor committee that comprises representatives of the local authority, the Chamber of Commerce, economists and representatives of community organizations. The main task of the committee is to hold discussions with all stakeholders to find solutions to problems, especially the security issue.

In the framework of following up the implementation of the outputs, the Partnership and Local Development Team in Taiz held a joint meeting with the Superintendent of Security of Taiz governorate, Major General Mansour Al-Akhali, and Director of the Planning Office in the governorate, Nabil Jamal, and a number of businessmen to discuss a mechanism to solve the problems faced by the private sector in the governorate. During the meeting, a mechanism to solve the problems that the private sector faced in the governorate was approved. A liaison officer to contribute to the speedy handling of urgent problems was appointed.

The team plans to hold meetings with the army, judiciary and local authority leaders and to coordinate efforts with the various stakeholders in order for each party to fulfill its legal duty to solve the problems of the private sector and protect it from illegal practices and levies.

A Progress Tracking Team in Hadramout
In Hadramout, the vision of the private sector to recover economic activity represented the basis for discussions that took place in two discussion sessions in Mukalla and Seiyun. Member of the Board of Directors of the Hadramout Chamber of Commerce and Industry Saleh Karamah Omair, stressed the importance of pushing for the recovery of economic activity in a way that served community development and raise community standards of living. He underscores the need for establishing appropriate solutions and strengthening partnership to create a comprehensive development in the governorate, pointing out that the private sector was the key and essential partner for pushing the wheel of the economy forward and achieving development.

Hadramout Governorate Assistant Deputy for Valley and Desert Directorates Affairs, Hisham Mohammad Al-Saidi, suggested forming a work group to oversee the implementation of the outputs and recommendations of this discussion session with the relevant authorities to ensure their implementation.
For his part, Chairman Board of Directors of the Chamber of Commerce and Industry of the Valley and the Dessert of Hadramout, Sheikh Aref Al-Zubaidi, said, “Everyone should feel the importance of developing the economy of the governorate, which everyone looks upon with respect and appreciation. The governorate is worthy of that because of its geographical location, and its human, agricultural and fish resources.

” He stressed the readiness of the Chamber of Commerce and Industry in the valley and the desert, to provide all facilitation and to contribute to the success of such studies that will benefit the individual and society.

No development without a strong and influential private sector

Marib hosted a discussion on the private sector vision to recover economic activity in Marib governorate and future options. The governor of Marib, Abd Rabbo Miftah, stated that it was a valuable opportunity should that be exploited by the various sectors.

He praised the leading and significant role played by SEMC in Marib governorate in the economic and other aspects.
Miftah called for benefiting from the state of stability in Marib and all the facilities provided to the private sector in the various investment fields by the local authority in the governorate. He reviewed the advantages that Marib currently enjoyed, which constituted attractive factors for investors.
For his part, chairman of the Chamber of Commerce and Industry in Marib, Muhammad Al-Kharraz, said that Marib was steadily moving forward to compensate for years of deprivation and neglect, guided by the steadfast determination of the leadership of the local authority and in cooperation with partners from the private sector and civil society organizations. He underscored the fact that Marib was in dire need of such meetings and conferences to discuss the most important opportunities and challenges and come up with visions and perceptions that serve the present and foresee the future.
Al-Kharraz added that the successful economic experiences of many countries with huge economies emphasized that the private sector was a basic and effective partner in them, as there was no development without a strong and influential private sector.
Executive Director of SEMC, Muhammad Ismail, said that these meetings were part of a series of meetings targeting the governorates of Taiz, Hadramout, Marib and Aden. He explained that the meetings aimed to discuss the economic conditions in these governorates in all their ramifications based on the economic environment, resources and the impact of the war on the economic constituents. They also sought to discuss opportunities and challenges in order to come up with a clear future vision to improve the economic situation in the target governorates.