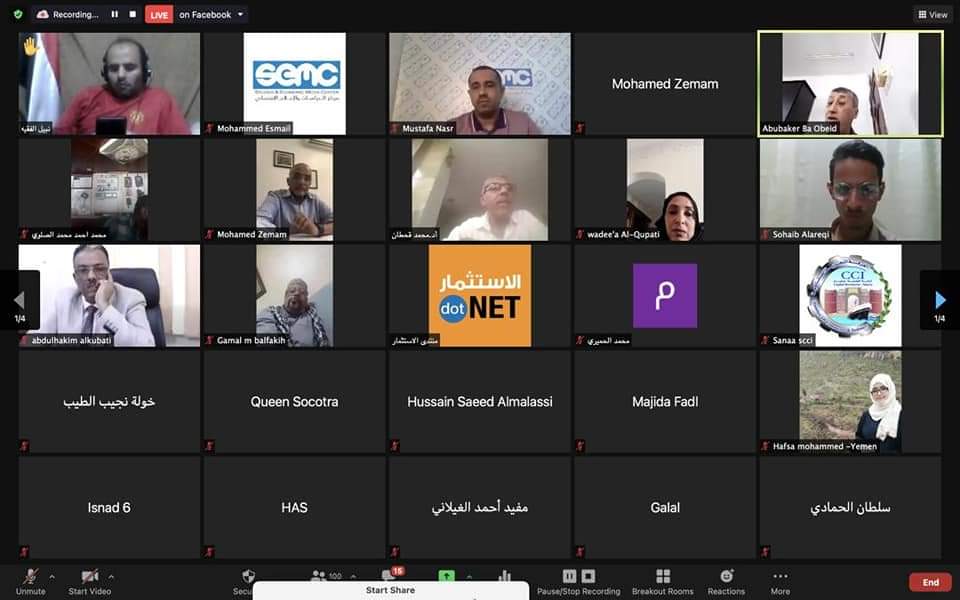 Participants in a symposium on the decision to raise the customs dollar exchange rate and its repercussions on commodity prices, organized by the Studies and Economic Media Center, stressed the need to resolve contentious issues related to economic affairs through understanding and dialogue, and government openness to the private sector.
The symposium organized by SEMC through “zoom” video communication technology also recommended the necessity of creating a real partnership between the government and the private sector, and participating in all decisions related to the economic aspect because of its significant impact on stabilizing the prices of goods and services.
During the symposium many basic themes related to decision-making in the government and the private sector were discussed by economists and keynote speakers.

At the opening of the symposium, which was attended by more than 100 academics and specialists in the economic field, former CBY Governor, Mohamed Zimam, speaks about the definition of the customs dollar exchange rate, noting that it has nothing to do with raising the customs tariff.
Zimam explains that the customs dollar is one of the financial policy tools, and is an economic term used by the Ministry of Finance, represented by the customs, for the purpose of customs evaluation to determine the value of imported goods. He further elaborates that it is an exceptional way to facilitate the calculation of fees, adding that it is used when the exchange rates fluctuates significantly within a month while the difference exceeds 15%.
Zimam states that the average customs tariff in Yemen is 7%, considering that prices in Yemen rise by one hundred percent while they cannot be raised by a percentage exceeding the value of the basic tariff.

The former CBY governor suggested forming a joint committee from the government and the private sector to provide information and data regarding decisions related to the economic aspect.
Zimam also suggests that SEMC shall organize a seminar for the private sector. The seminar shall be attended by the main chambers of commerce in the country, to coordinate private sector activities away from the political and administrative division. He stressed the need for the application of a different mechanism for the customs exchange rate, such as making a list of imports to which the liberalized exchange rate shall be applied, and a list of basic commodities to which an appropriate exchange rate is applied.
He states that discussing decisions related to economic affairs is not necessarily a discussion of whether a decision is right or not.

Rather such decisions shall be discussed in terms of the timing of the decision and the form and nature of the environment in which the decision is to be implemented, pointing out that raising the customs exchange rate is a temporary mechanism that has certain conditions, and does not mean lifting customs.
For his part, chairman of the Chamber of Commerce and Industry, in Aden, Abu Bakr Ba Ubaid, explains that what worried the private sector in relation to in the decision to raise the customs exchange rate, was the government failure to discuss the matter with the private sector.

He also demands that the various customs outlets shall deposit the additional resources yielded from the process of raising the customs dollar exchange rate to the CBY and the state’s public treasury.
He warns of the thriving of smuggling as a result of the government’s stubborn insistence to keep this decision in force. Instead of the government benefiting from 350 billion rials annually, it will lose it, as traders resort to smuggling, noting that this decision will lead to an increase in the prices of all commodities and basic items, since it includes oil derivatives, which affect the various living conditions.
Chairman of the Customs Authority, Abdulhakim Al-Qubati, denies any impact on the prices of commodities and foodstuffs as a result of the government decision to raise the customs dollar exchange rate.
Al-Qubati explains that the Customs Authority operates within an integrated system and is a sovereign body affiliated with the Ministry of Finance; it carries out the government instructions and decisions and the instructions of the relevant government agencies.
Chairman of the Customs Authority indicates the positive aspects of the government decision to raise the customs dollar exchange rate, including the increase in the volume of revenues collected by the authority by 100%, from 350 billion rials this year to 700 billion rials next year.
He points out that the decision will enable the government to fulfill its financial obligations without resorting to other options that impose burdens on the economy, such as printing new banknotes. According to Qubati, the decision is a bold move as it conveys a message to the international community and the donors that the government makes economic reforms and manages its resources ideally.
Oubati denies any selective measures in the application of customs tariffs, pointing out that a unified tariff is applied at all Yemeni land and sea ports.
He points out that the situation has returned to normal at the customs of the free zone in Aden, after the containers were piled up during the past days, that the situation is very ideal now, and that there are no problems any longer, as he puts it.
For his part, Mohammad Shihab, a businessman, spoke about the impact of the decision on the private sector, noting that the impact was reflected on the materials imported by the Shihab Company. He stated that increases in prices ranged between zero to three percent to five percent, explaining that prices of some accessories would rise by more than 10 percent.
Shihab considers raising the customs exchange rate as a symptom of the devaluation of the national currency against the dollar, and therefore, the main problem lies in controlling the exchange rate, calling on the government to preserve the value of the national currency to prevent the emergence of these symptoms.
Shihab revealed that the prices of the materials imported by his company have increased by 300% to 400% since the beginning of the war, as a result of the devaluation of the national currency, pointing out that the decision to raise the customs dollar exchange rate would affect the prices of the Shihab Company by 3% to 5%.
He explained that the other factor that would contribute to a price hike was the transportation fares, both domestic and international, in terms of the multiplicity of security points and militias, and the multiplicity of customs levies. He pointed out that this issue caused prices to rise more than the decision to raise the customs exchange rate did.
Economic expert, Abdussalam Al-Athuri, believes that the problem of raising the customs exchange rate is related to the repercussions of the decision in private sector circles because there is a party that believes that this decision will result in an increase in the prices of goods and services. On the other hand, the government sees that this decision is necessary, especially since over the past years it has been dependent on overdraft. According to Athuri, this represents an economic problem that is reflected on prices of commodities, basic materials and the purchasing power.
He points out that the customs tariff does not constitute a big problem, given the nature of the deteriorating economic situation, because the rate of increase in prices caused by the decision to raise the customs exchange rate is not huge, compared to the impact of the devaluation of the national currency on goods and services.
Al-Athori calls on the private sector to join the government move and encourage it to find ways to provide liquidity from tangible resources, so that the situation is not permanently tied to overdrafts.
He stresses the fact that addressing these issues requires wisdom on the part of the private sector, and an openness on the part of the government to deal with all the problems suffered by the private sector. He calls for resolving the issue through dialogue in a way that ensures improving state revenues and covering government expenditures from tangible resources instead of relying on overdrafts, and finding a real partnership between the government and the private sector.
Several observers and interested individuals attending the symposium also participated in the discussions. Their contributions focused on the necessity of government openness to the private sector, and solving outstanding problems through understanding and dialogue, giving primacy to the country’s supreme interest and the economic situation in the country.
The participants also recommended that all parties assume their responsibilities towards the deteriorating conditions in the country, the inflation of commodity prices, the currency split, and the widening of famine, and work on the need to develop prompt solutions, with absolute transparency to ensure that a humanitarian catastrophe is avoided in the country.
It is noteworthy that SEMC is a non-profit civil society organization promoting a successful and transparent economic system through training and raising the citizens’ awareness of economic issues, and enhancing transparency and citizen participation in decision-making. It promotes professional media and economic empowerment of youth and women and enhancing their role in peacebuilding.
To listen to and view more information, follow the following link to the symposium on Facebook: