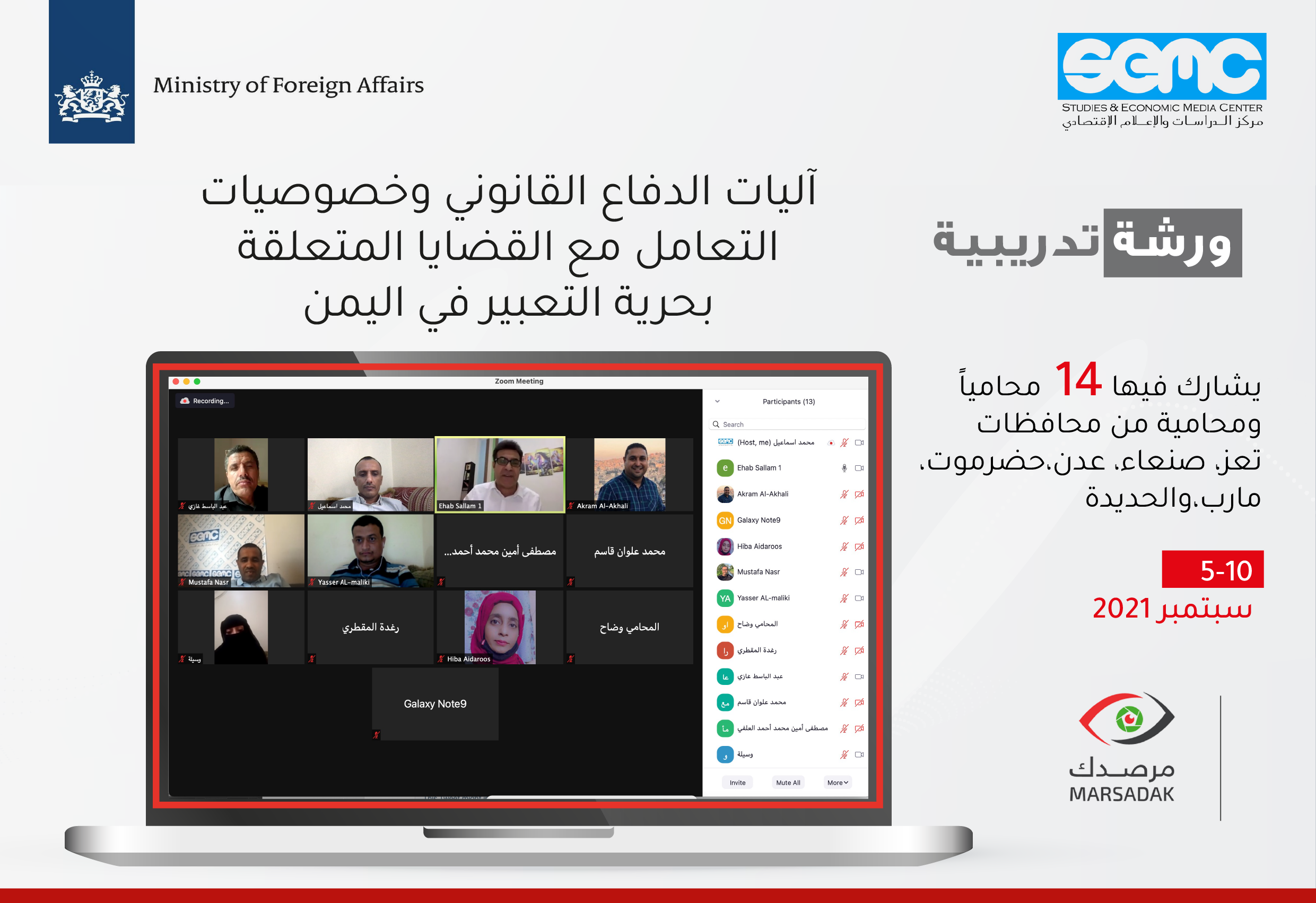 The training workshop on “Legal Mechanisms for Defending Media Freedom Issues in Yemen” began yesterday , in which a number of male and female lawyers defending journalists are participating. It is implemented by the Studies and Economic Media Center (SEMC) in partnership with the Dutch Embassy in Yemen. The trainer, Ehab Salam, is delivering the training.

At the opening of the workshop, the head of SEMC, Mustafa Nasr, stressed the importance of cooperation between lawyers and journalists and  their common goals to defend rights, freedoms and ordinary people, and to bring justice.

Nasser stressed the importance of role of the journalist finding out the truth and expressing his opinion freely , adding that this can’t be done unless journalist has legal backing, hence the role of defenders of journalists is crucial.

For his part, the official of development programs at the Dutch embassy, Akram Alak-haly, said that the embassy was interested in supporting programs aimed at defending rights and freedoms in Yemen, pointing to the importance of this qualitative program, which meets an urgent need of media freedoms and the right to expression.

Alak-haly affirmed that the embassy seeks, through the program, to support media freedoms in Yemen, pointing to the important activities included in the program, while ensuring that there is a role for female journalists and lawyers within the program.

SEMC executive director Mohammed Ismail, reviewed  what the training received by male and female lawyers from “Lawyers to Defend Journalists” bloc, who will provide the legal  support to journalists really in need for legal defending services in media and publishing issues.

The trainees, during the next phase,  will be providing free legal support to journalists to ensure fair trials for them, and to defend their rights in line with the constitutional principles guaranteeing freedom of expression and international standards for media freedom, as well as contributing to the improvement of media legislation.

For his part, the expert trainer, Ihab Salam, reviewed the axes of the training workshop , which will last for five days and discuss all topics of freedom of expression, such as the international conventions guaranteeing freedom of expression, local legislation and the prohibitions of media publishing, intellectual property, others issues.

He pointed out that training a group of Yemeni male and female lawyers defending journalists is an important step in transferring knowledge to a broader segment of lawyers and human rights defenders in Yemen.

that is implemented by SEMC in partnership with the Dutch Embassy in Yemen.