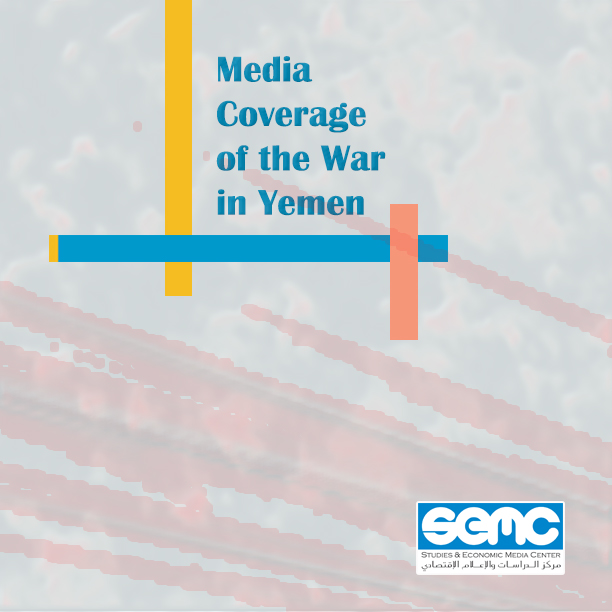 In Study Issued By SEMC :- Human Stories form Only 8% of Yemeni media Coverage

In Study Issued By SEMC

A study, published by Studies & Economic Media Center (SEMC) ,  revealed the low percentage of peace speech in Yemeni media , and the dominance of inflammatory language. Where 70% of programs and news talk about military battles only with the omission of talk about peace or peace initiatives..

Study that comes within the project of media freedom monitoring ,  targeted ten  partisan and independent TV channels and inferred that the Yemeni media uses extremely provocative language. 63.9%  of all the sample programs and news used very provocative and inciting language and highly emotional tones to such news stories, despite of that the fact such styles are not needed. The aim was to intensify the conflict and win over the feelings of the public towards the other opponent party.

The study also  reveals that many humanitarian stories depicting the suffering and hardships of the Yemeni people due to the deterioration of the economic and human conditions are set aside and ignored; this is so because media outlets are occupied by broadcasting and presenting news related to military confrontations and clashes and violent practices. Neither consideration nor attention is given to the poor and needy suffering from the war and conflict. Sample programs and news dealing with humanitarian issues accounted for only 7.5% of the total sample programs and news.

The study also show that half of the number of sample programs and news monitored by the study team intended to present the conflict ambiguous and unclear for all viewers. They made viewers and the public experience a number of blur scenarios of the conflict. The reality of the current conflict and true reasons behind it were not presented nor tapped on nor were influential parties fueling and prolonging the conflict hinted at. This, definitely, is to prevent the public from really understanding the significance of the new developments and events referred to by the programs and/or any piece of news.

The study findings have shown that 54.9% of the sample programs and news only cover the news of one of the conflicting parties in Yemen while attempting to cover the other party’s news but in an unfair and bias manner in order to distort and give a negative image of that party.

Mustafa Nasr, Chairman of SEMC, explained that study aims to  evaluate  of the treatment of the media in Yemen (TV channels) with the war in Yemen since March 2015 through the achievement of a number of goals is the extent of the media provided information on the nature of the conflict and stages of development, and sensitivity to the sensitivity of the conflict and its role in reaching peace And a comprehensive solution to the war in Yemen, as well as its handling of humanitarian issues produced by the war.

Nasr attributed the reasons for the dominance of the inflammatory language to the phenomenon of polarization which  is apparently clear that since the outset of the war, the Yemeni media attempted to recruit as much as supporters as possible. This led to divide the media into two groups; one of which supports the internationally recognized legitimate government headed by President Abdurabou Mansour Hadi while the other is supportive and affiliated to the Houthis and former President Ali Saleh.

He added  that the conflicting parties have exploited the media to have a more supportive public opinion in order to pass their political agendas and goals. They exerted efforts to attract advocates to their military and political trends. Under the framework of each conflicting party emerged media outlets with agendas. Relying on funding, such media outlets are affiliated and follow local parties and agencies while others follow foreign parties.

“This does not mean that there are no media outlets trying hard to be professional in a conflict-prone environment, but they are limited,” Nasr said, praising some channels, websites and radio stations that try to provide the public with information based on facts.

The study affirmed on the extreme need to facilitate and hold workshops and training courses geared for offering journalists the necessary know-how and galvanizing their skills. This is in order for them to comprehend the true meaning of peace and establish its real meaning in the light of the cultural, socio-economic changes. As well as building the capacities of journalists is a must especially in the areas related to conflict-sensitive journalism.

The study also recommended of  the importance of a  review and reconsideration must be done to media regulations and laws governing media work must in order to allow media people and outlets cover events and conflicts in accordance with journalistic ethical standards. Also the necessity to develop a charter for journalists and journalistic profession that incorporates issues related to war and peace.

Study recommended that the media must give more attention and consideration to humanitarian issues. This must be in a fair and non-biased manner through abiding by standards and mechanisms governing the writing of the news stories related to humanitarian issues in such a way that they are effective and influential and at the same time, do not provoke any further conflict and clashes nor are they exploited by any of the conflicting parties. This could only be done by training and qualifying journalists to effectively draft such news stories and adopt humanitarian issues.

The Studies and Economic Media Center (SEMC) is one of the most prominent Yemeni NGOs that works on , and spreads  awareness of economic issues, in addition to buttressing good governance and public engagement in decision making, and working towards the creation of professional media