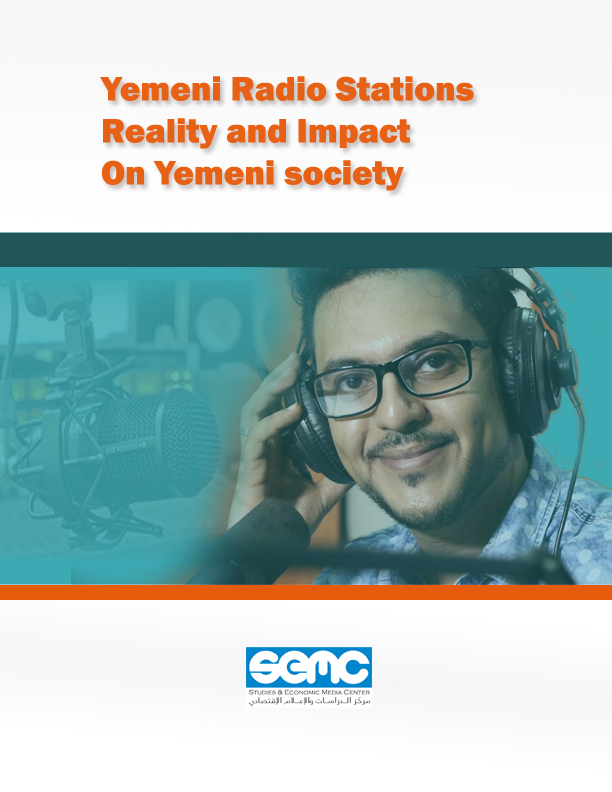 SEMC launches an evaluation study on Yemeni radio stations, their reality and impact on society

Studies & Economic Media Center ( SEMC ) issued an evaluation study on the Yemeni radio stations. The study revealed the absence of social issues and basic services, such as electricity, water, road networks, and security problems, represent only a small percentage of radio coverage , accounting for only 20%. While Entertainment, music, sports and politics account for 80% of radio programs

According to the results of the study , these radio stations do not focus in their programs on significant issues such as, rising prices of food items and oil products, damage to the agricultural sector due to the continued increase in prices of oil products, unemployment and absence of job opportunities, the issue of salaries and its impact in families, lack of educational and health projects in the countryside, manipulation of admission criteria in colleges, family disintegration, absence of rights and freedoms under the current war in Yemen , security issues of theft, looting, killing, cutting, vengeance and kidnapping, and Power outages.

The study revealed that Women-centered programs also make up a small percentage of other programs- 2.2% of airtime per week, despite social groups, including women, facing problems, social challenges and difficult living conditions due to the ongoing conflict. These include displacement, disruption of public services, such as electricity and water, lack of health services, which are especially inaccessible to women and children , rising rape cases, women victims of military confrontations , among other problems facing Yemeni women.

In decision- making the study pointed out that Radio stations suffer from over-centralization in terms of decision-making, which affects the handling of different events and thus the professional level of broadcasting, where management controls the artistic, editorial and professional work within radio stations, which hinders the spirit of revival and innovation and limits the ceiling of permissible freedoms.

From his part, Mr. Mustafa Nasr, Chairman of studies & Economic media Center ( SEMC ) ,said that despite the large number of radio stations in Yemen, but its role was very small, these radio station should play an active role in transmitting the suffering of citizens, and Advocate their issues and aware them. However, these radio stations still play a minor role in relation to women, children, young people, and even to the basic services of citizens. we noticed that these stations focus more on entertainment , music and political issues than the community issues.

Nasr added, the radio stations in Yemen are required to develop media awareness plans to encourage women to work and change the negative attitudes towards them. Also to design media programs for women to discuss the needs, priorities and challenges that hinder active participation of women in various fields. In addition to preparing and broadcasting media programs specializes in women’s literacy in alphabetical, cultural and political topics.

The study came out with several recommendations, such as , radio stations should focus on Society’s priority issues , which are related to the lives of citizens and their livelihood, There is need for radio stations to utilize their program contents to increase the areas of communication between listeners and government agencies by providing the opportunity for listeners to present their problems to officials to resolve them.