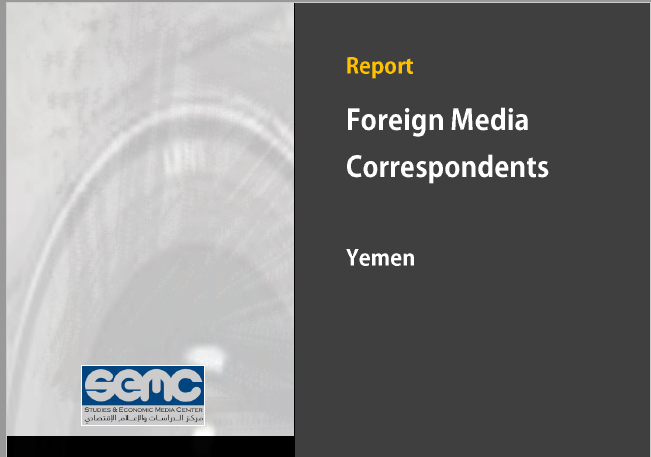 SEMC Issues a Report on Foreign Media Correspondents in Yemen

Mustfa Nasr SEMC chairman Said that the report aims to shed light on the situation of international media correspondents in Yemen and the difficulties they face in telling the world the full story of the suffering of Yemenis. Unless restrictions on international media correspondents are uplifted, the tragic situation in Yemen will continue unabated, and will even deteriorate further.

Nasr added that In spite of this tragic situation, Yemen is almost totally absent on international screens and other media outlets. If covered at all, coverage is often very short, and does not reflect the catastrophic conditions experienced by Yemenis, due to the suppression of the freedom of the press by the so-called Arab Coalition and the Houthi militia alike. Both conflicting parties impose severe restrictions on international media correspondents, including difficulties of entry into the country, difficulties in obtaining entry visas from the authorities: Houthis and the Aden-based government alike, and the unaffordable airfares.

The report demanded the international community, including human rights organizations and press freedom bodies, shall bear its responsibilities, and pressurize all parties in Yemen to respect freedom of expression and to enable the media to play its role in covering events and human suffering.

The report recommended of the needs to neutralize the work of foreign media correspondents of the conflicting parties in Yemen. This would enable them to report events from the various parts of the country without compromising their freedom and independent professional character. As well as Stopping all violations and movement restrictions imposed on foreign media correspondents while carrying out their duty of covering events, and punishing perpetrators. Also the report insist on facilitating the entry of foreign journalists into Yemen, clarifying procedures for obtaining visas and facilitating their access to flights, whether through United Nations or Yemen Airways flights.

The report also insisting of the importance of opening Sana’a International Airport and all other Yemeni airports to facilitate the task of foreign journalists to reach the various regions in Yemen and cover the humanitarian disaster in the country.