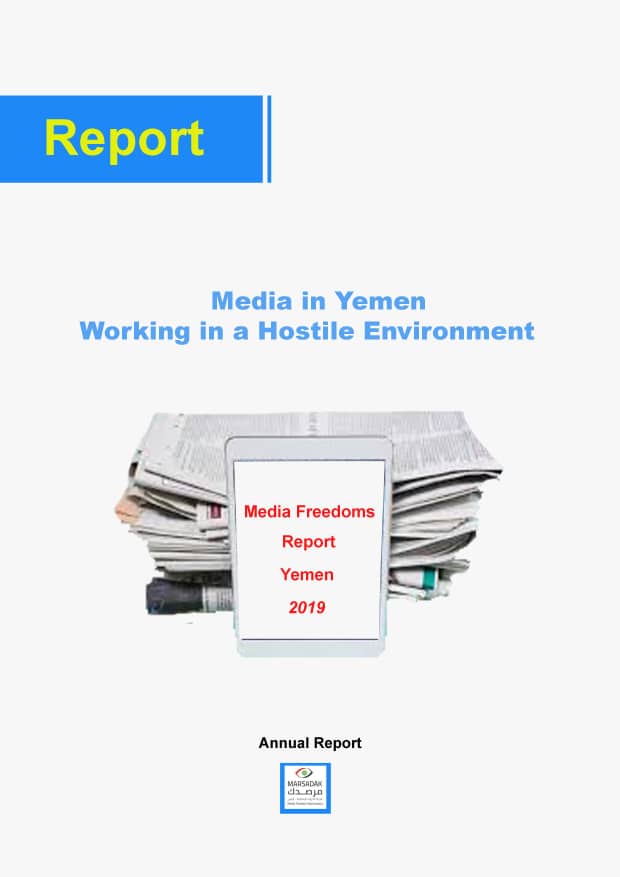 The Yemeni Media Freedom Observatory (YMFO) announced that 143 violations of media freedom were recorded in Yemen in 2019, including two cases of murder of media personnel. Various types of violations were perpetrated against journalists, including physical injuries, kidnappings, assaults and targeting media institutions.

According to YMFO, in addition to the cases of murder, 9 cases of injury, 6 kidnappings, 15 arrests, 30 assaults, 20 threats, a single case of suspension from work, and 11 violations of media institutions were recorded. Moreover, 49 other cases were also documented, including trial of journalists and a circular inhibiting registration and disposal of assets belonging to 25 journalists and media outlets in an initial step of seizure of such property.

According to YMFO, journalists in Yemen work in a hostile environment due to the escalation of systematic repressive practices against journalists by all parties to the conflict, as all conflicting parties view the media as their archenemy. In 2019, illegal and arbitrary practices against journalists and the number of journalists detained without trial increased.  In Sanaa, the Houthis still refuse to release journalists detained in Houthi-run prisons, some of whom have been detained for more than four years. Parties affiliated to the internationally recognized Yemeni government also arrested journalists in areas under its control, such as Taiz, Aden, Shabwa and Hadramout.

The Houthis top the list of perpetrators of violations targeting journalists in Yemen, being involved in 75 violations of the total number of cases recorded. Parties affiliated to the Yemeni government were involved in 37 cases of violations; whereas 16 violations were perpetrated by unidentified persons and 7 cases by parties affiliated to Southern Transitional Council (STC) militants. A single case was perpetrated by Saudi-led Arab coalition forces, and 7 cases were attributed to other perpetrators.

According to YMFO annual report, Violations of Media Freedom in Yemen, in 2019, 11 media institutions were subject to various violations. These included 4 cases of looting of media outlet property, a single case of storming of the Yemeni News Agency, Saba, in Aden, and 4 cases of assaulting media institutions; namely the radio and TV headquarters, 14th October newspaper office, and Al-Shari’ newspaper office. The other cases involved firing live bullets at Aden Al-Ghad newspaper office, and plagiarizing the Here’s Aden brand name.

According to YMFO, the state of international silence and the conflicting parties’ impunity for violations encouraged these parties to deal brutally with and to commit such crimes as murder, torture and threats to the personal safety of journalists.  Such crimes are part of a systematic campaign against freedom of the press, targeting principally journalists who refuse to adopt partisan views and reject the dictates of those parties which seek to enlist journalists willing to propagate their partisan views and cover up crimes against civilians.

Eighteen journalists are still detained in the prisons of the Houthis, the Aden-based government and Al-Qaeda. The Houthis refuse to release 16 journalists detained in their prisons, some of whom have been detained for more than four years. Those detained journalists are Abdul-Khaliq Imran, Tawfiq Al-Mansoori, Harith Hameed, Hisham Tarmoum, Hisham Al-Yousufi, Akram Al-Walidi, Isam Belghith Hassan Annab and Haitham Al-Shehab. The other journalists are Waheed Al-Sufi – who was kidnapped in April 2015, Salah Al-Qadi, Abdul-Hafiz Al-Samadi, Hamed Al-Qa’oud, Anwar Al-Haj, Bilal Al-Arifi and Mohammad Al-Salahi. Mohammad Ali, a journalist, was also arrested by the internationally recognized Yemeni government in the Marib governorate. Finally, Muhammad al-Muqri, a journalist, was kidnapped by Al-Qaeda in Hadramout during al-Qaeda takeover of the city in 2015, and his fate is still shrouded in mystery. 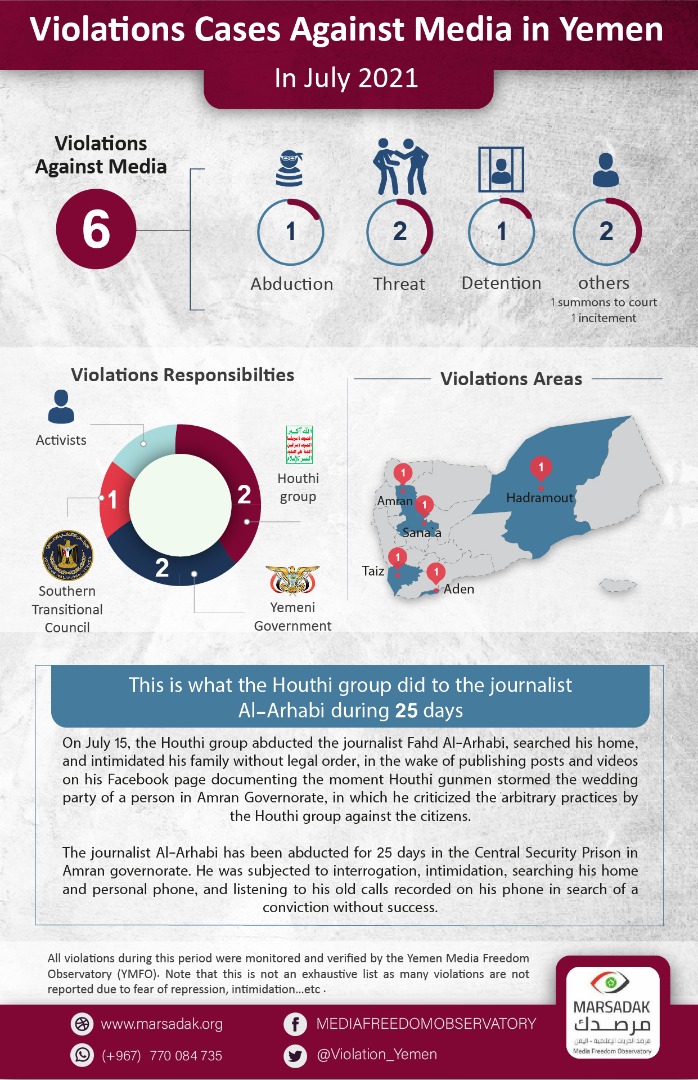 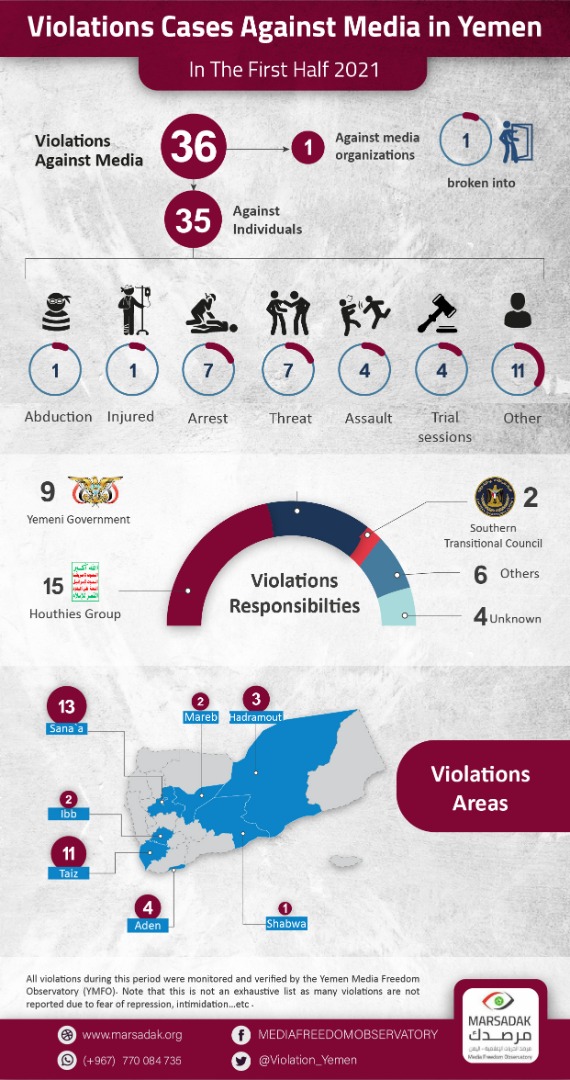