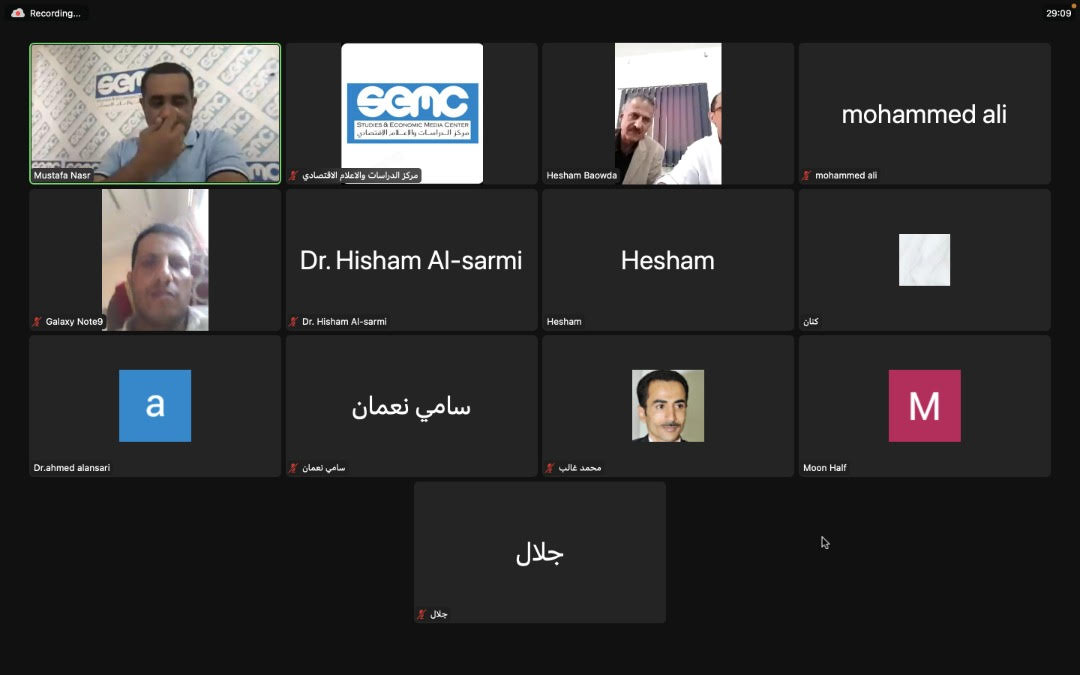 In Webinar: Demands to revoke Decision of Separating Aden’s Port from Free Zone and End Constructions

The participants in a webinar on the free zone in Aden demanded to must revoke the Prime Minister’s decision, which has separated the port of Aden from the free zone, as well as canceling the decision to allow building new houses in the precincts of the free zone, and the need to retake over the lands that were taken from it.

The participants stressed the need to review the file of the free zone, reactivate its role, appoint a competent department, and involve the private sector in the management of the free zone.

The webinar, which was organized by Studies & Economic Media Center in cooperation with the Economic Reforms Team in Yemen via Zoom call, in the presence of a number of businessmen, experts and specialists in economic affairs, aimed to discuss and enrich the policy paper on activating and developing the Aden Free Zone.

At the opening of the webinar, Mustafa Nasr, president of Studies & Economic Media Center, spoke about the importance of the Aden’s Free Zone as it is a focal point between the Gulf and East Africa regions, and the roles it can play in attracting investments in partnership and integration with the private sector to become one of the most important tributaries of the national economy. Nassr pointed out to the long-term role played by the city of Aden, with its distinguished geographical location, as it is a focal point at the regional and international levels.
Nasr added that this paper comes in the context of contributing to the development and activation of the free zone to restore the role it can play in encouraging investment, stressing that the difficulties and barriers the free zone faced has limited its ambitious roles and importance.

For his part, the economic expert, Alawi Bahramuz, stressed that the free zone has a distinct legislative structure, and that the nocks that the free zone has received resulted from a lack of understanding of the economics of the free zone and what it can do to support the national economy.
Bahramuz also stressed that the decision to separate the port of Aden from the free zone constituted a fatal nock to the meaning of the free zone and the port, as well as the economic future of Aden, in addition to the decision to build new housing units in the lands of the free zone, making it a residential neighbourhood in the city.
For his part, researcher Hisham Mohsen Baawadah reviewed the policy paper on activating and developing the Aden’s Free Zone – challenges and proposed solutions, which was prepared by the Center during the past months, with the aim of activating and developing Aden’s Free Zone. The paper included an analysis of the problems, challenges and obstacles, and proposals for practical solutions .

The participants in the workshop also stressed the need to fight rampant corruption in the administration of the free zone, and the need to end the war and activate the free zone to support the national economy and stop the economic deterioration that Yemen has been going through as a result of the war imposed for eight years.

The workshop came out with a set of proposals and recommendations that would develop the ideas and proposals included in the paper that would find practical solutions to activate and develop the free zone in a way that contributes to creating comprehensive economic development and achieving the aspirations of the private sector and citizens alike.

It is noteworthy that Studies & Economic Media Center is a civil society organisation working for a successful and transparent Yemeni economy by promoting awareness of economic and development issues, transparency and good governance, and creating professional media.